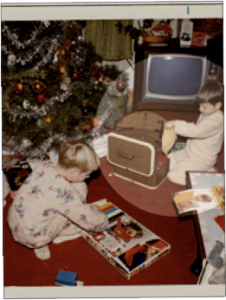 Michael started to do makeup as a wee tot. His mom got him his first makeup kit at age 7.  Doing the best he could to make himself, and his friends look like Dracula, Frankenstein, and the Joker from Batman.. all early inspirations.

Later, in his teens, he delved into makeup FX, duplicating the ape makeup from the original Planet of the Apes, and wearing it for Halloween.. and to high school a special event!!

Finally, in the early 90’s, he made his way into the Local 706 Makeup Artists Union and has worked on some of the biggest (and smallest) movies ever made, Titanic, Cowboys and Aliens, and Dead and Breakfast!